One door closes, another opens: Hat product Torrin White moving to Ottawa after University of Lethbridge hockey shut down 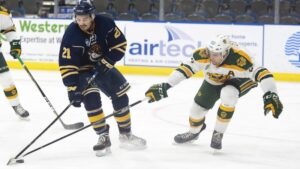 Torrin White has shifted his focus to Carleton.

The 25-year-old Hatter had his post-secondary hockey career put on hold when the University of Lethbridge announced it was eliminating the Pronghorns hockey programs last month in response to cuts made by the provincial government. Thankfully, White says he was already in the process of joining up with Ottawa’s Carleton University Ravens for his fifth and final season.

“Once I got accepted, which was in the middle of March, that’s kind of when it was set in stone. But it was a bit of a process through the year,” said White, who will pursue a Master of philanthropy and non-profit leadership at Carleton. “I stumbled upon that (Master’s program) as almost a match made in heaven. I’m really excited, I’m actually in my summer semester right now so I’ve already started â€¦ There’s a lot of stuff in it that I’m looking forward to learning, regarding fundraising, leadership, how to run a not-for-profit, what goes into it, stuff like that. For me, it’s more about the learning process than actually getting the degree.”

Although he wasn’t planning on playing with the Pronghorns next season, White says the news that Lethbridge’s hockey program was folding still came as a devastating revelation.Â

“For the first couple days there was a lot of emotions, a lot of frustrations. We made a bit of an effort to see what we could do to keep the program, and then once we learned what would have to go into it, and the university’s stance, I think the guys -Â and the women’s team too – kind of started looking at other options,” said White. “Our coach, Murray Nystrom, did a great job reaching out to other schools. I would say three-quarters of our team have already decided on new places to go, which is great. We all loved our time in Lethbridge.

“It was the best four years of my life, but guys are going to have new experiences now, meet new friends, live in new cities. You can take some positives from it, but in the end it was really disappointing to lose a program that meant so much to the community, and a program with so much history.”

White played four full seasons in the Western Hockey League with the Moose Jaw Warriors, then one with the British Columbia Hockey League’s Langley Rivermen before joining up with the Lethbridge Pronghorns in 2016. The 5-foot-9, 180-pound right-winger went on to play 88 games with the Pronghorns over four seasons, finishing with 21 goals and 21 assists.

Through his years with the Warriors and Pronghorns, White says he gained an appreciation for philanthropic community efforts, which ultimately led him down the path to his current post-graduate program.Â

“Those experiences, for sure, played a part in the program I’m taking now out of Carleton,” said White. “Moose Jaw’s a small town, and a community-owned team, so they’re a huge part of the community there. You’ve got to give back every chance you get. I kind of took that experience in Moose Jaw and built on it at the University of Lethbridge. We started a couple of community programs that were really successful and, I think, made a pretty big difference in the community.”

White’s younger brother Jaeger – a former Medicine Hat Tigers forward – committed to Carleton last season, though a ruptured Achilles tendon prevented him from competing. Jaeger has since opted to play with the Calgary Dinos next season, but had good things to say about the Ravens.

“Jaeger was out there for the first semester and then came home at Christmas,” said Torrin. “He kind of found out he wouldn’t be playing for a while still, so he’s been taking classes through second semester, just through Athabasca University because he’s activated his WHL scholarship already. Next year I think his plan is to take kinesiology and education at U of C.”

It’s been an interesting turnaround, as Torrin spent part of last summer driving Jaeger out to Ottawa and now he’ll be making the trip again – almost exactly one year later – for himself.

“I got a chance to see the city and the school and everything, and meet some of the coaches, which was a really cool experience,” Torrin said of driving his brother out to the school last year. “When I was looking into Master’s programs, that’s kind of the first place I looked because of the familiarity. Also, I think more than half (Carleton’s) team is from out West, so there’s a lot of guys that I played with and I know that are out there.”

For the time being, Torrin is living at his father’s home in Airdrie, doing what he can to stay in shape while he waits out the COVID-19 pandemic.Â

“It’s a luxury to have a bike right now, which is what I spend most of my time doing,” said Torrin. “And I’m lucky to have a brother that’s kind of a fitness freak, so he puts together programs for the whole family, and nutrition plans.”

Editor’s note: A previous version of this story incorrectly stated that Jaeger White played one game with the Carleton Ravens this season. A ruptured Achilles tendon prevented him from playing at all. Eliteprospects.com incorrectly lists White as having played one game at Carleton.