Hamblin looks back on career 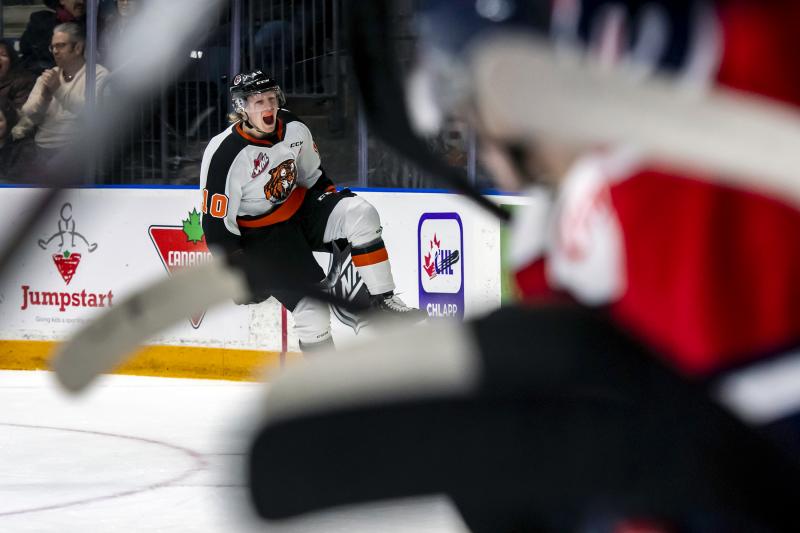 When James Hamblin looks back on his junior hockey career, he won’t be focusing on what he lost, only the family he gained.

Hamblin spent his entire five-year career with the Medicine Hat Tigers and served as captain for the past two seasons. While a league mandate prevented him from discussing the way his career ended – with COVID-19 prompting the cancellation of his final playoff run – Hamblin took the time to reflect on the things he’ll remember most from his time in orange and black.Â

“I’m trying to think back and there are just so many highlights, so many memories,” said Hamblin, who finished his 324-game career with 115 goals, 169 assists and a plus-45 rating. “Going back to when I was 15 and being able to come up for a playoff stint, and just seeing how amazing the fans are here, how amazing the city is. Getting a chance to be with the group and learn from some really top-end guys, then to come in at 16 and have a learning year – I didn’t get to play much but I got to practice a lot with some really good players and kind of build my game. Every year after that I just got more and more of an opportunity to play my game and have more of a role. And then being very honoured and privileged to be able to captain the team for the last two years.”

While it’s been filled with hard-earned highlights, it’s been anything but an easy road for Hamblin over the past few years. The 20-year-old Edmonton product entered the Tigers system as the 17th overall pick in the 2014 bantam draft and earned a full-time role for his 16-year-old season, but on Sept. 6, 2017 – as Hamblin was preparing for his first NHL camp with the Boston Bruins -Â he lost his mother, Gina, to cancer.Â

Thankfully, Hamblin says he received an incredible outpouring of support from teammates, coaches and staff – a group that ultimately became his second family.Â Â

“I think that’s probably the biggest takeaway from my time in Medicine Hat, is just how much of a family everyone has been and how much support everyone has given me,” said Hamblin. “For the entire team to come up (to Edmonton) and be at my mom’s funeral, that went above and beyond. I can only say thanks to all those former players and coaches and the owners and everyone in the organization that really helped me through those times.”

Tragedy continued to follow Hamblin into the next year, when close friend Parker Tobin was killed in the Humboldt Broncos crash that took 16 lives and injured 13 more on April 6, 2018. In the face of these hardships, Hamblin refused to crumble. Instead, the hard-working two-way forward opted to see the Canalta Centre as an outlet, a way to escape everything but the game itself.

“It has been a very difficult past couple of years, but using that rink as kind of a getaway – all the guys knew that and supported me so much,” said Hamblin.Â

He then took his game to new heights, earning the captain’s C to start the 2018-19 season and leading the Tigers into the playoffs with a 77-point campaign – completing the road from greenhorn to linchpin over just a few years, before becoming the first two-season captain in Medicine Hat since Hunter Shinkaruk.Â

“I was really lucky when I was younger. I had a lot of guys who took me under their wing and showed me the ropes,” said Hamblin. “Being the older guy now, I really just tried to do the same thing – respect everyone no matter what. I was once in their position so I know where they’re coming from. I’m just trying to share with them everything I have and help them along the best way possible.”

Hamblin added he credits a good deal of his development to playing under the guidance of former head coach and general manager Shaun Clouston for the first four seasons of his career, while Willie Desjardins – who took over the dual-role this year – helped him find another level in his final WHL season.Â

“I have just a lot of thanks for (Clouston). He gave me a lot of opportunity to come in at 15 and learn. I then progressed the next three years, giving me more and more of a role. He was a great mentor for me coming up. He definitely showed me the ropes and allowed me to be the player I am today,” said Hamblin, who ended up finishing third in this year’s shortened WHL scoring race with 36 goals and 56 assists in 63 games under Desjardins.

“Willie is awesome. He’s really personal – he cares and he shows that he cares. Frankly, guys just want to play for him. Guys want to go on the ice and do their best because they know their coach is doing the same thing, putting in as much or more effort as you.”Â

With his junior career at an end, Hamblin is now waiting things out at home, hoping to put pen to paper on a professional contract once the COVID-19 pandemic is finally under control – but the reigning Tigers community service award winner is still finding ways to give back from isolation.

“I’m holding out trying to get a pro contract and trying to land somewhere for next year,” he said. “When it comes to the isolation I’m doing my best to help out the community as well. I’m working with Quantum Speed, a power skating company that I’ve worked with for a long time, and we’re working to do webinars and stuff for stick handling and staying fit inside. We’re trying to reach the young kids and give them something to do every day.”

He may not know what the future holds, but Hamblin says he hopes to return to the Canalta Centre for a proper send-off if the opportunity ever arises.Â

“Medicine Hat is honestly a second home for me, with my grandparents being from Medicine Hat and just the bonds I’ve made over the past five years. I would love nothing more than to do that,” said Hamblin, adding he knows he’s leaving the Tigers in good hands.

“We talk about leaving the organization better off than when you started and I think I can say that’s the case for me. I think this organization is moving in such a great direction at the moment. It should be very exciting. There’s some really great young talent with some really good older guys as well. The facilities are top notch, the coaches are the best in the league and the owners care so much that it should be a very bright future for the Tigers.”