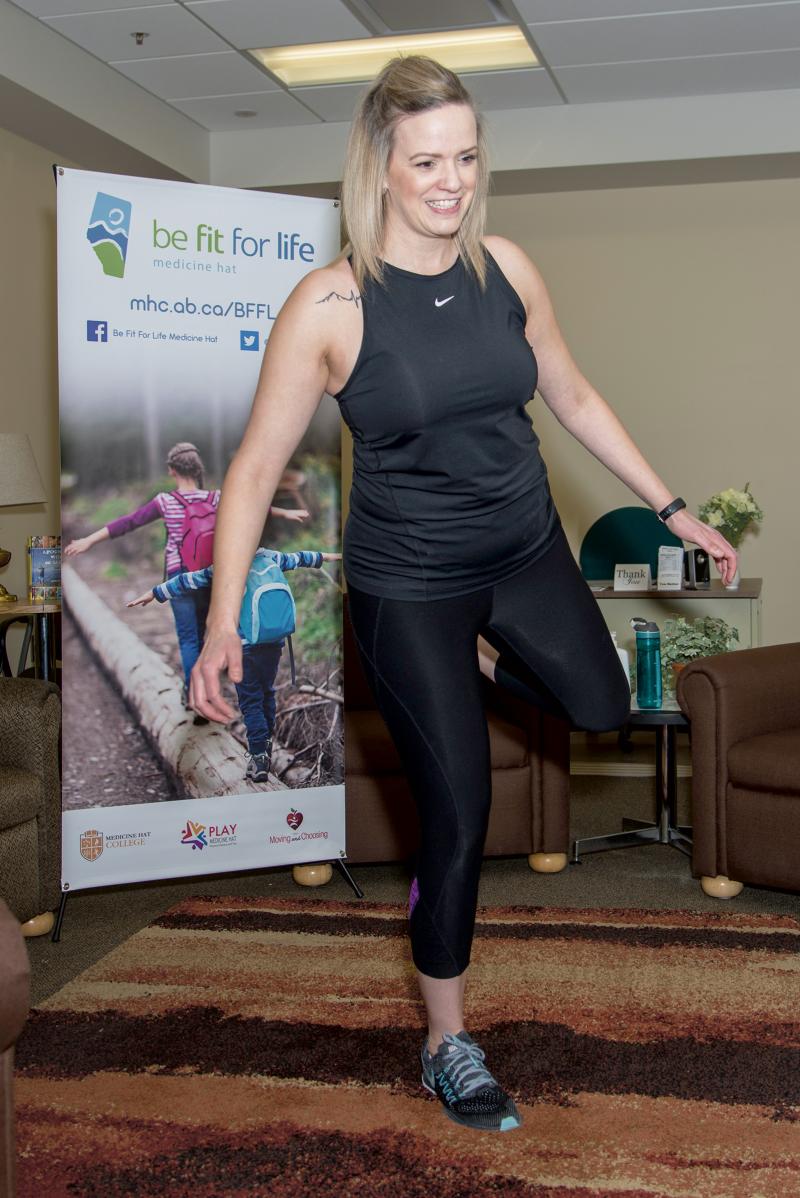 When the provincial government’s orders forced their two gyms and a karate business to close, Collin and Alyssa DeWolfe had to get creative.

At the same time, Tara Chisholm and the college’s Be Fit For Life Centre suddenly had communities to reach.

The answer? Online video and technology to bridge the gap to everyone in isolation due to the global pandemic.

“You have personal relationships with all your gym members, they’re kind of like family at some point,” said Collin DeWolfe, co-owner with his wife of Back Alley Fitness and Karate-Do Academy in Medicine Hat, plus 24 Fitness Fix in Redcliff. “It was terrifying, the moment they announced we had to close all those businesses.”

Alyssa did a whole workout video Thursday night with a backpack full of soup cans. Chisholm and college staff worked to produce a series of videos they’ll release over the next few weeks. Even the national para women’s hockey team, of which Chisholm is the head coach, is holding live stickhandling sessions three times a week.

“It’s actually been super-busy,” said Chisholm, who’s also been dealing with fallout from cancelling the Rattler Run and a wheelchair basketball fundraising tournament. “We’ve been busy trying to produce some videos, both here at the college but also from my different volunteer hats.”

Paralympian Derek Whitson, now an assistant coach alongside fiancÃ©e Chisholm on the para hockey team, led the first Facebook Live stickhandling segment Monday. Players will host similar segments moving forward, connecting a global community trying to expand its presence and be included in the Paralympics alongside the men’s teams.

While quarantines and gym closures may make staying active tougher, it’s far from impossible. As the DeWolfe’s note, you just have to think outside the box.

“You’ve got some really good resources around your house,” said Alyssa. “You’ve got No. 1, the thing you carry around you all the time, which is your body weight. People can modify how they do things in order to use their body weight to provide resistance in unique ways. There are tons of programs out there that show you how to get creative and use your body weight as resistance.”

But that doesn’t add up the same way an actual barbell can. So some gyms are even renting out their equipment.

Chisholm says the Be Fit For Life Centre will release fitness classes on its Facebook page in addition to some active break sessions geared towards children, who she notes can’t be forgotten in all of this as well.

On the other side of the energy equation, a more sedentary existence due to isolation could be an opportunity for nutritionists to offer valuable advice. The DeWolfe’s were already doing that as an online service, which they’ll now focus on more as their 350 gym members won’t be seeing much of one another for the foreseeable future.

“If you’re a big guy who trains hard lifting big weights in the gym, your body weight workouts aren’t going to be quite the same so maybe you need to eat a little bit less,” noted Collin.

“The other thing we were looking at doing was virtual classes. We’ve just got to keep people moving. It might not be perfect, but the situation isn’t perfect.”

Through it all, supporting one another has been the common theme. It applies to the experts too, especially business owners whose entire incomes basically vanished over the course of a week.

“Yesterday I took a couple hours to be sad and feel sorry for myself,” said Alyssa on Wednesday. “Then this morning I went back in with the mindset that this is an experience for us and I think for our community and our world to realize what we take for granted in a major way, our health… and to not take for granted our local businesses or what we have access to.

“We do need to support each other better because you never know when a circumstance is going to come up that is beyond our control and all we have is our community.”