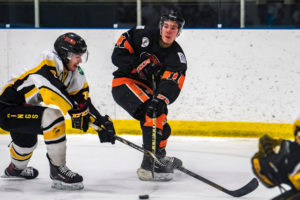 NEWS PHOTO RYAN MCCRACKEN
Brayden Anderson of the Medicine Hat Cubs centres a puck during a playoff game against the Strathmore Wheatland Kings Thursday at the Kinplex.

Goals came at a premium, but the Medicine Hat Cubs prevailed in a 3-0 victory over the Strathmore Wheatland Kings to take an early edge in their best-of-five, first-round Heritage Junior B Hockey League playoff series on Thursday night at the Kinplex

Levi Schlosser broke open a scoreless game halfway through the second period then Mason Fischer and Mackenzie Fritzler scored in succession to put the game away in the third.

“I think it was a complete effort,” said Cubs goaltender Logan Leroux, who stopped 26 shots to earn the shutout in relief of injured starter Dawsen Savage. “It’s too bad what happened (to Savage), but it gives me an opportunity to play and I love it.”

Medicine Hat pushed the early pace by peppering Wheatland Kings goaltender Brett Willan with 17 shots through the opening frame, but Willan stopped them all to keep Strathmore in a deadlock despite putting just five pucks on goal.

“I think now we’ve seen what they have to offer,” said Wheatland Kings head coach Ron West. “On our end, we need to make sure we come out ready to play as soon as we drop the puck. We’ve got to go at it and play with them. We let them skate and take it to us in the first period, we did not battle in the first period like we should.”

The Cubs got right back to it after killing off an early penalty to start the second, then Schlosser finally ripped one past Willan to snap the stalemate and give Medicine Hat an edge after 40 minutes.

The Kings brought a stronger effort to the third, but found themselves shorthanded when Thomas Tyson was booked for slashing halfway through the frame. Fischer converted on the chance, then Fritzler added another less than a minute later to push the game out of reach.

“The back-to-back goals were definitely nice,” said Fischer. “It kind of gave us more of a breather.”

Strathmore kept pushing for a way onto the scoreboard, but Leroux kept them at bay to lock up the shutout.

“You can’t ask more of him, coming out here and making the saves that he did,” said Fischer. “The saves he did bail us out on, there were a few where without him making those saves, it could come to a different game.”

Willan stopped 45 shots in the loss.

The series continues with Game 2 tonight in Strathmore at 8 p.m.

Game 3 is slated for 2:30 p.m. Sunday at the Kinplex, with Games 4 and 5 to follow Monday in Strathmore and Tuesday in Medicine Hat, if necessary.