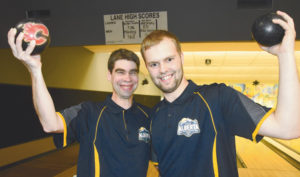 It turns out there was a silver lining when Medicine Hat’s Special Olympics bowlers came in second place at last year’s Alberta Winter Games.

Though they didn’t earn an automatic spot at nationals, two of the local athletes were named as alternates.

Sure enough, Tyler Scott and Sinjin Soper each got a nice surprise when word came their talents would be needed in Thunder Bay, Ont. starting next weekend.

Scott got the call in July and Soper in December to replace members on the Edmonton 5-pin bowling team.

“Happy,” said Scott, who will make his first appearance at a national games, of how he felt when he found out. “Excited.”

The multisport games will see a team of 98 from Alberta attend, 30 of those bowlers. There’s quite a lot different this time around than when Soper went two years ago, notably that bowling was separated out into its own championship on a completely different weekend from the other sports because the small city on Prince Edward Island couldn’t handle the thousands of athletes, coaches and staff all at one time. That was part of the summer games, but 5-pin has switched over to be part of the winter edition this year.

Even the scoring system is different, forgoing the usual pins over average for a scratch contest in which the only thing that matters is what you score on the day.

Soper says he’s ready for it.

“I feel good about it,” he said, noting his best-ever score is 222. “It’s my first time up there, it’s going to be good to meet these guys.”

There’s still individual and team medals to be won as Scott and Soper throw their nine games Feb. 26-28. But they don’t know their Edmonton-based teammates that well, especially Soper who hasn’t had a chance to practice with them since being added to the team less than two months ago.

Alberta bowling coach Kristen Sept isn’t concerned about the lack of familiarity. Sept, who’s been coaching Scott and Soper at Panorama Lanes all year, says they’re both great teammates who love to compete against each other.

“We’re looking at them to just embrace the opportunity,” said Sept, who will oversee the entire team of 30 Alberta bowlers in Thunder Bay. “It is a huge honour to be able to wear the Team Alberta uniform, and compete at a national level. The sport makes up a huge part of why we’re going, but at the same time being able to go to the other sport venues, cheer on our fellow Albertans, and just embrace the opportunity as a whole.”

Soper says he’s most looking forward to watching the skating events, while Scott can’t wait to take it all in.