Tigers Bjorklund, Svejkovsky both get spots on NHL scouting’s list of top propsects 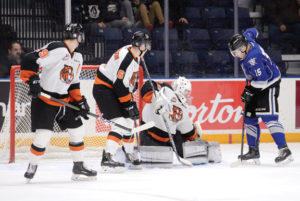 The 18-year-old was listed in the 10th spot among North American netminders in the rankings released Monday. He still ranks behind Moose Jaw’s Brock Gould (fourth), Lethbridge’s Bryan Thomson (fifth) and Kamloops’ Dylan Garand (seventh) among WHL talent on the board, but his 16-3 record will no doubt continue to attract attention.

Bjorklund, from Calgary, is already 3-0 in 2020 having backstopped two Tigers wins in the past week.

Only one other Tiger made the rankings, which are a guide for NHL scouts ahead of the annual summer draft. Lukas Svejkovsky, acquired in last month’s trade with Vancouver, is the 195th-rated skater. The Washington-born forward has 20 points in 32 games between the Giants and Tigers this season, including a goal in Saturday’s win over Moose Jaw.

The Tigers hold their annual skills competition Thursday, 7 p.m. at Canalta Centre before hosting the Lethbridge Hurricanes Saturday and heading to Edmonton Sunday to play the Oil Kings.