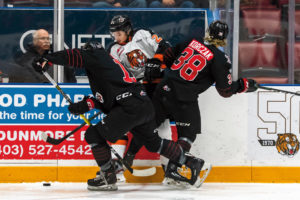 The Medicine Hat Tigers dug their way out of an early deficit to steal a 5-2 victory from the Moose Jaw Warriors on Friday night at Canalta Centre.

After falling into a 2-0 hole in the first period, the Tigers slowly chipped away at Warriors netminder Boston Bilous before Brett Kemp finally netted the game-winner in the dying minutes of the third.

“We need all these points,” said Kemp, who had three points in the win. “We definitely know we’re better than that team and we can beat them, so to come back was definitely nice.”

The victory pushes Medicine Hat to 27-12-1-1 on the season – eight points back of the Central Division-leading Edmonton Oil Kings with two games in hand.

Medicine Hat took ownership of the early momentum, but the Warriors struck first when Dru Krebs turned a puck over at the blue line and Logan Doust took it the other way for his first goal since being traded to Moose Jaw from the Victoria Royals Thursday.

Warriors captain Owen Hardy tacked on two minutes later when he broke in on an odd-man rush and opted to shoot – beating Hat netminder Garin Bjorklund high to make it 2-0 on Moose Jaw’s third shot of the game.

“I think that’s the best start we’ve had all year,” said Hardy. “We were playing fast, playing smart, playing to our systems. I think if we just find a way to play like that for 60 minutes we’ll give ourselves a good chance to win games.”

Medicine Hat cut into the lead later in the frame when rookie Caleb Willms took advantage of a hard bounce off the end boards and beat a sprawling Bilous to make it 2-1 entering the second.

“It definitely felt really good. It was a little bit of a gift, but I’ll take it,” said Willms. “We knew we just had to keep playing to our game. Once we did that we just kept our feet moving and kept shooting pucks on net.”

Bjorklund settled back into his crease and finished the first period with 12 saves, while Bilous – playing in his second game with the Warriors debut being traded from the Prince Albert Raiders Tuesday – kept the Tabbies at bay with 16 stops in the frame.

Medicine Hat entered the second on a blistering pace – holding Moose Jaw to a single shot through the first 10 minutes while putting 11 on Bilous – but they were unable to generate an equalizer.

“He’s an unbelievable goalie,” said Kemp. “We knew he’s big, we had to get traffic in front of him and we definitely did that and it paid off.”

The Warriors earned three straight chances to pull away when Eric Van Impe, Parker Gavlas and James Hamblin were nabbed on consecutive minor penalties, but they too came up empty-handed.

Kemp forced the Tigers back into the conversation early in the third when he found rookie Cole Sillinger waiting in the slot for a highlight-reel goal.

“(Kemp) has great skills. He’s a good hockey player,” said Tigers head coach Willie Desjardins. “I think he’s proven a number of times how good he is. It was great. We needed a big third period and he came out and gave us a big third period.”

Hungry for the lead, Medicine Hat kept the pedal down and Kemp pushed the Tigers out in front by dangling his way past Bilous with less than five minutes left in regulation.

The Warriors attempted to rebound from the back-breaking tally, but they were unable to get anything else past Bjorklund – who ended the game with a 22-save win.

“We could have been down four in the first period. He made a couple good saves,” Desjardins said of Bjorklund. “He’s a good goaltender. I expect it from him, I have confidence in him. That’s why we left him in.”

Kemp added an empty-netter for his 20th goal of the year with just over a minute left, then Daniel Baker hit the open cage again 30 seconds later to seal the victory.

“To get 20 is obviously nice but I’ve got to give credit to my linemates,” said Kemp. “They’ve been here helping me out throughout the whole season.”

Bilous was left with the setback despite stopping 44 of the 47 shots he faced.

“He’s been incredible for us,” said Hardy, whose Warriors slipped to 11-24-2-0 with the loss. “We’ve got to find a way to not let so many pucks get through. He’s saving 40-plus shots a night so far, that’s just incredible, but we’ve got to be a little bit better in front of him.”

The Tigers and Warriors go back at it Saturday in Moose Jaw to close out a home-and-home set at 6 p.m.