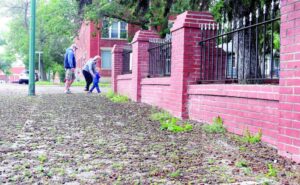 The intense downpour and burst of pea-sized hail lashed trees and set a record for the date, officially bringing down 13 millimetres (about one-half inch) of precipitation in about 30 minutes at the Environment Canada Weather station at Medicine Hat Regional Airport.

Areas in Crescent Heights likely received much more, according to city officials, which said the rain inundated the storm sewer system and crews were called out to clear clogs and monitor the situation.

“The north of the city was hardest hit and as you move south it seems to have been less and less,” said Jeremy Petryschyn, superintendent of operations with municipal works.

Crews were still surveying the system Monday and the department reinitiated localized street sweeping activities to clear up the detritus.