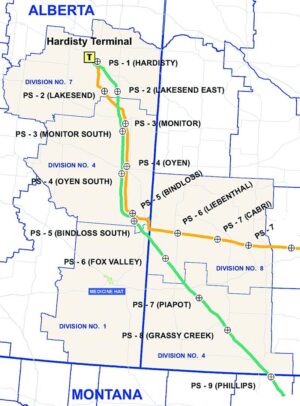 A map showing Keystone XL plans as the pipeline will run along the Alberta- Saskatchewan boundary before cutting through Saskatchewan and into the U.S.--IMAGE COURTESY TC ENERGY WEBSITE

Workers showed up in Oyen on Monday to begin final surveying for Keystone XL construction that will move ahead this summer, according to the company that has been delayed for almost a decade in building the export oil pipeline.

This week TC Energy named Michels Pipeline as the main contractor on the Alberta portion of the line that has faced court challenges and policy changes from U.S. federal administrations.

It plans to hire 600 employees in the near term and stage them in Oyen as it builds the line 260 kilometres east from the Saskatchewan boundary to terminals in east-central Alberta.

“It’s been eight years of waiting for it to happen, but it will be good stimulus up and down Highway 41.”

Jones’ town will be nearest to a major work camp to accommodate most of the up to 1,000 workers, and the company says some local lodging will be required.

Both TC Energy and Michels say there’s a mandate to seek out local supply and subcontracting firms when possible, and the general population of workers typically means higher spending on gas, groceries, and hospitality industries, like bars and restaurants.

Jones said the work and workers could provide a needed injection into those sectors.

“Things have been slow, especially with COVID, and it won’t happen tomorrow, but businesses are excited about the spinoffs,” he said.

A statement from TC Energy outlines that “we along with Michels are taking proactive steps to manage the health risk and prevent the spread of the infection.”

On Tuesday, Michels, which has Canadian operations based in Nisku, was announced as the main contractor on the Alberta portion of the line that would transport oil to a main U.S. hub in Nebraska.

Premier Jason Kenney, whose government invested $1.5 billion in the line in March and guaranteed another $6 billion in loans to TC, said his government’s actions were showing results.

“After several months of bleak economic news, it’s invigorating to see Alberta’s investment in Keystone XL begin to pay off with the confirmation of the imminent hiring of 1,000 construction workers each year over the next two years,” read a statement from the premier’s office.

TC Energy says 600 workers will be employed soon and that construction has already commenced at pump station locations at Bindloss and Hardisty, Alta.

TC Energy hopes to have about 175 kilometres of pipe installed by the end of 2020, and the entire line complete in the spring of 2022.

The route runs from Hardisty south to Oyen, then Bindloss, before crossing the Saskatchewan boundary near Empress. It then runs to Fox Valley and generally southeastward to Piapot and Grassy Creek (near Eastend) pump stations and crosses the Montana border at Val Marie.

A contractor and schedule for the Saskatchewan leg have not been announced.