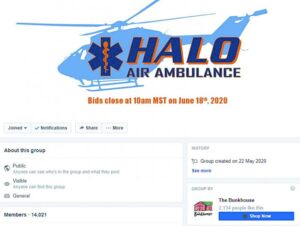 A screenshot of the HALO fundraising group on Facebook.

When Nicole Viste created the HALO Fundraiser group on Facebook last Friday, the idea was simple: get local businesses together to help the aerial emergency services organization.

“This was never intended to get this big,” she wrote in a text interview with the News. “I am blown away by the generosity I have seen, but not surprised as the hearts of people in this area always seemed a little bit bigger.”

Viste estimates the value of the items and services donated is more than $185,000. That’s admittedly not even a month’s worth of funding for the air rescue service that’s been in the skies of southern Alberta and Saskatchewan since 2007, but what it says to a provincial government still debating whether to help out is much more.

“We certainly knew it was possible, but we’re overwhelmed at the outpouring of community support,” said Paul Carolan, HALO’s chief operating officer. “I think it would be ill-advised for the provincial government to ignore the amount of support that we have.”

Carolan said between Viste’s group, another created this week, a free french-fry event and others, the community is showing how much they value the Medicine Hat-based service.

“We could never express how grateful we are to the southern Alberta community,” he said. “HALO’s coming off its most successful fundraising year in history. In spite of COVID-19, people are showing that there are ways to weather storms like this, and it will make it possible to develop those plans going forward.”

The new Facebook group, Border Communities Fundraiser for HALO Air Ambulance, has more than 1,800 members and almost 100 items worth a combined $30,000. Between them, items range from the simple – 12 rolls of toilet paper – to the incredible, like signed sports memorabilia, parties and services worth thousands of dollars.

“The nearest hospital to Wildhorse is Medicine Hat which is 145 km away,” said Border Communities group creator Denise Reuber-Graham. “Waiting for an ambulance to get there and back would take hours. When minutes can make a difference between life and death, I don’t know about you, but for me, if it was me or one of my family members, I’d want that extra advantage.”

There are numerous other fundraisers shaping up, including a live auction in July and plenty of challenges. The two main Facebook auctions will close in mid-June, plus direct donations are set up via E-transfer and at banks.

For Viste, who’s run the entire group by herself by tethering data to her computer from a cellphone, it’s all worth it.

“I am so thankful for all the people that donated and continue to bid that made this so successful,” she wrote. “Hopefully it encourages someone â€¦ to step forward and continue with a more permanent fundraising plan.”