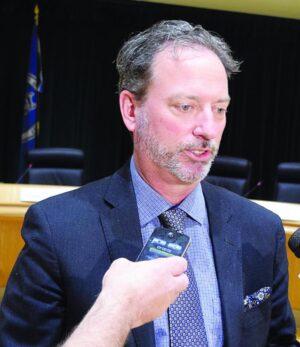 Mayor Ted Clugston is open to using Truth and Reconciliation 'guiding' statement on things like city letterhead but is "not likely" to use the statement to open personal speeches.--NEWS FILE PHOTO

Mayor Ted Clugston wants to see an “acknowledgement statement” drafted by city staff related to Truth and Reconciliation with Indigenous peoples, but says he won’t take part in the practice of announcing local treaties before his own speeches.

On Monday, city council asked staff to create an acknowledgement statement after receiving a recommendation from a city advisory board, though several councillors expressed a level of unease.

Clugston said he thinks the statement could be put on city letterhead, folded into a mission statement or be made declaration of council, such as anti-poverty or a local food charter.

“It’s by no means decided, but will I be making a statement before every speech? Not likely,” Clugston told reporters on a conference call following the meeting.

“It’s just not my thing. I like to recognize everybody and treat everybody equally.”

For several years, governments and institutions have made it standard to begin press conferences, announcements and meetings with an acknowledgement. That usually takes the form of a declaration that proceedings are taking place on land described in treaties or which is represented by a particular MÃ©tis group.

In Medicine Hat’s case it sits on the boundary of lands described by Treaties 4 and 7, and residents of MÃ©tis descent are represented by the Region III council.

The report received Tuesday is the work of council’s Arts and Heritage Advisory Board over the past year and comes with recommendation that council directs staff to continue the work.

At the same meeting, councillors also approved a long-awaited plan to delineate the boundaries of “Saratoga Park” and declare it the land in the South Flats as an historic resource.

A trail running west from Scholten Hill on the south side of the Seven Persons Creek is already named for the area that was a First Nations encampment when the town was founded, then later part of industrialization and a well-known MÃ©tis neighbourhood that successive city councils attempted to clear in the middle of the last century.

The separate “Acknowledgement” item denotes the area, outlines that a residential school operated here in the 1890s, and states “the name of our city points to a First Nations past that should be proudly acknowledged.”

Coun. Phil Turnbull said he would support the Saratoga Park initiative, but was unsure about a “statement of acknowledgement, recognition and respect” as it is officially described.

“I think, as a city, we honour that heritage already in a very real way,” he told council, “Saratoga Park is a far better way to honour MÃ©tis people than a statement.”

Coun. Darren Hirsch, who was the board chair at Medicine Hat College when it developed its own policies for reconciliation, asked for clarification about the process taken so far.

Chief administrator Bob Nicloay told council that the advisory committee listed it as a goal last year and this month presented a summary of its research to council’s public services committee.

That is a recommendation to council – i.e. to finalize work – since the advisory committee doesn’t have the authority to direct staff. Therefore, a council approval is required before staff can begin examining the issue.

The Arts and Heritage Advisory Board, a council-appointed group of public members, has submitted its research and final report on potential local action for the Truth and Recognition movement.

Council has now directed city hall staff to develop a statement for approval working off that research and a “guiding” statement, which reads as follows:

“Our city is situated on treaty land that is steeped in rich indigenous history and is still home to many First Nations and MÃ©tis people. We accept responsibility for the stewardship of the land on which we live and work, and honour the traditions of the spirit of this place now called Medicine Hat.”

It describes the lands were traditional homes and gathering places of the Siskika, Kainai, Piikani, Stoney-Nakoda, Tsuut’ina and Cree, Souiw and Saulteaux peoples and MÃ©tis, and concludes, “We strive for respectful inclusive partnerships with all the peoples of Medicine Hat and area as we search for collective healing and true reconciliation.”