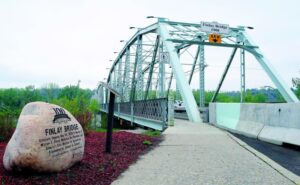 Finlay bridge will undergo construction this summer to replace the current wood and asphalt deck with concrete and replace the north abutment after the $1.7-million contract was awarded on Tuesday night.--NEWS PHOTO COLLIN GALLANT

Finlay Bridge, the last iron span of its era still in use in Western Canada, will be stripped and given a new concrete deck this summer, city council heard on Tuesday.

But councillors didn’t have to reach back too far into the past to recall to 2008 work on the 1900s era bridge that connects Riverside to downtown, and wonder why work was needed again so soon.

Administrators and councillors say the bridge is needed, and a new deck will keep it in good stead for up to 40 years after the new work, estimated to cost $2.5 million.

“It’s still made of wood, which is hard to believe in this day and age,” said Mayor Ted Clugston, referring to bracing that sits under an asphalt that that is presently rippled since 2008.

That year council approved a substantial refurbishment to celebrate its centennial, including replacing all rivets and the deck and removing decades of built-up lead paint. Pedestrian walkways were also widened.

The environmental containment cost of working over a flowing river pushed the overall budget to more than $15 million, said Coun. Robert Dumanowski.

“It’s a great bridge and I’m glad we still have it,” he said.

Clugston recalled that the project also ran so far behind schedule that the performance bond on the project paid the entire cost of LED to be installed along the 244-metre (910-foot) length that is named for William Finlay, who was the city’s first MLA when Alberta became a province in 1905.

Work that will begin at the end of May and last into the summer will see the deck replaced with concrete, the north abutment replaced, plus some general maintenance, iron work and paint touches.

The contract, worth $1.7-million, was awarded to Horseshoe Hill Construction this week, after that firm was one of two that bid on the work.

The firm was last working in Medicine Hat when it completed the northbound Trans-Canada Highway bridge after 2013 when the original contractor for Alberta Transportation project, ConCreate, went into receivership midway through.

Coun. Brian Varga posed the question to administrators about the history of the company, and also wondered why the tender received relatively little interest.

Documents included in council’s package show only two finalized bids were submitted, and the other – Edmonton-based CWP Constructors – was deemed non-compliant. Neither bid value was included in the public package.

“I wonder how in this day and age, when a lot of companies want to do work, how only two companies put in bids,” said Varga.

Infrastructure commissioner Stan Schwartzenberger said it is hard to determine interest level when projects are bid out, and CWP hadn’t registered for the city’s prequalification process, thereby making it non-compliant.

“We still went with the best qualified bid and it happened to be the low bid,” he said. “AB transportation has very good references on their (Horseshoe Hill’s) work.”

The complete project budget of $2.5 million, including engineering work and contingencies, is funded by the city’s share of the federal gas tax and the provincial Municipal Sustainability Initiative infrastructure grant program.