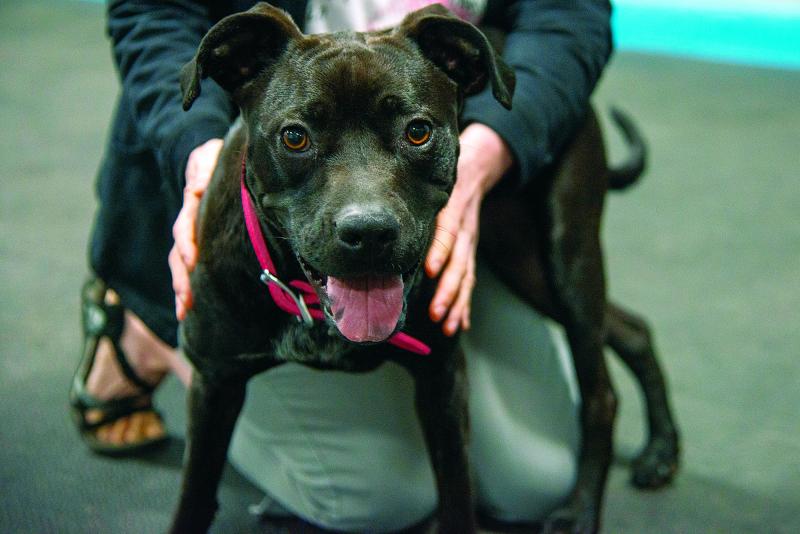 The black spots on Montana's tongue were used to identify her when she was found in Calgary.--NEWS PHOTO RYAN MCCRACKEN

Some tails come with a happy ending.

On March 22, a man was passing through Redcliff and lost his dog. Over the course of the following month an incredible story of teamwork unfolded to track down a one-year-old pitbull-Catahoula mix named Montana. On April 22, Montana was found – in Calgary.

Oh, the stories that dog would tell.

“It was stressful in a way, it was fun in a way, but I’m glad she’s back,” said Susan Pahl, who spearheaded the search with her son Graham. “There were quite a few people involved.”

It all started when Graham found a black male dog named Bear on March 22 in Medicine Hat. After a quick search, Graham and Susan tracked down Bear’s owner and reunited the two that same day. But shortly afterward, Susan received a call from a woman in Florida looking for a nearly identical, but female dog.

The woman was calling on behalf of her uncle Robert Duxbury, who had lost his companion at Burger King in Redcliff. Duxbury was on his way to an important medical appointment with the shadow of COVID-19 looming over the nation, so he was unable to stick around and search for Montana.

“She described it and I told her I would help her,” said Susan. “That began the monthlong search for Montana.”

Duxbury is now stuck in Sudbury, Ont., awaiting his medical appointment, which is on hold due to the pandemic.

Thankfully, Gas City Dog Club vice president and trainer Sterling Hinch stepped up to board Montana until she’s able to be reunited with her rightful owner.

“At the moment he’s happy with Montana being here because he can’t really look after her in the position that he’s in,” said Hinch. “As soon as that’s over with, it all depends on which way he’s going. If he’s going back down into the States, I told him I would be willing to drive halfway, to Winnipeg, to meet him and drop the dog off. But if he’s coming back this way, then he’ll just come here. He can stay overnight here then take the dog and go the next morning.”

Hinch is one of many who chipped in time and effort to help track down, and now care for Montana. Susan says she quickly recruited Redcliff community peace officer Barry Steier as well as Dan Dueck of Microdyne computers to assist with expanding the search onto social media, and plenty others chipped in along the way.

“It’s not just one individual who did anything. It’s a culmination of everybody doing a little bit to help out a guy where everything was out of his control,” said Steier. “It’s one of those heartwarming things. No. 1, the community came together. Various people in the community spearheaded the public outcry, that would be Susan, and also the fact that Sterling Hinch has volunteered his time and money to go up to Calgary, pick up the dog, bring it back and hold the dog.”

As the news spread, suspicions began to mount that Montana had been stolen from the Burger King parking lot. After a month of searching and following up on leads, Susan and Graham saw a post on Facebook saying a dog matching Montana’s description had been found in Calgary.

It was her. But the mission was still far from over.

“It kind of gets complicated. Redcliff bylaw, and Redcliff RCMP, and Calgary Police Services and Calgary Animal Services were all involved,” said Graham. “We drove off to Calgary the first time and we were unable to bring her back because there was an investigation that was ongoing. Then the second time we went up with the Gas City Dog Club.”

Hinch added there was another party claiming ownership of the dog when they arrived to pick her up in Calgary, but conversations with Duxbury’s niece gave him insight into a few identifying features which cleared up the confusion.

“She gave me another clue as to that it was Montana, and nobody else knew it,” he said. “Most purebred dogs have little black marks on their tongues. She had about seven of them at the right placings and that. It took us an hour and 20 minutes from the time we got to Calgary to get her because someone else had laid claim to Montana as their dog. They couldn’t properly tell the bylaw people what she looked like, also about the black marks inside her tongue.

“Now she’s microchipped so there won’t be a problem.”

It took the work of a community, but Susan – who has dedicated 40 years to her career as a nurse – says the initiative is also a testament to the ties that bind frontline workers, no matter the distance between them or even the metric used to measure it.

“(Duxbury’s) a retired EMT of 33 years. Donna, the niece down in Florida, works with the police service,” she said. “I’ve been a nurse for 40 years and Sterling, who volunteered to keep the dog, he’s a retired firefighter.”

The story isn’t over yet, as Montana is still waiting to pounce on her best friend when the opportunity finally arises. Call it a happy intermission, with the best still yet to come.

“She’s just a beautiful dog. She’s got a good kind spirit, she’s very playful and gentle,” said Susan. “Everything is on hold right now, but Donna and Robert are just thrilled that we found the dog.”