Check your cameras, meteorite suspected to have fallen north of Medicine Hat 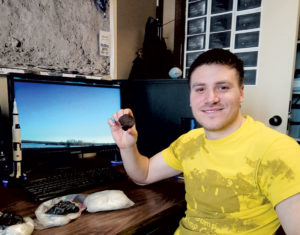 A meteorite is suspected of falling just north of the Hat in the daylight last weekend, according to a University of Calgary researcher.

Fabio Ciceri, a PhD student in planetary science, told the News he came across a video of the “daylight fireball” on social media.

He said he “immediately started investigating” and found some other videos of the phenomenon, which Ciceri says is an anomaly, since most meteors are observed in the evening.

“There are a lot of fireballs everyday around the world and when they are are at night, even the smallest fireball can be seen, something that doesn’t happen with daylight fireballs because you need a certain brightness in order to be seen,” he said, clarifying that he’s referring to the object’s brightness in contrast to the sky.

During the day, the meteor has to be of a particular size to get noticed, said Ciceri. In this instance, he estimates it was the size of a microwave.

“It’s tough to tell, but in agreement with my supervisor, who has more than 20 years experience searching for meteorites, it was probably between 100 and 500 kilograms,” he said. “You can’t be 100 per cent sure.”

The International Meteor Organization, which solicits videos from the public to track fireballs, reported 42 sightings, from as far west as Hinton and as far east as Goodsoil, Sask., with the largest concentrations in Calgary and Edmonton.

Ciceri says the meteorite’s precise location is unknown at this point, but the trajectory he’s gathered from the videos he’s seen thus far strongly points toward the Hat’s vicinity.

“We are very confident with that area,” he said. “It seems pretty reasonable to say we are sure it fell north of Medicine Hat.”

About 93 per cent of meteors that fall to earth are classified as chondrite, but Ciceri says based on how the videos show this one fragmenting it could be a weaker carbonaceous chondrite, which he said makes it “much more interesting for us.”

Since the Hat is just south of the meteorite’s landing point, Ciceri says any videos Hatters may have of the fireball would be indispensable for tracking its exact location down.

One benefit to having the meteorite land on a Saturday afternoon is that there are likely many witnesses.

“There are so many people that probably caught the meteorite in their camera or security camera and don’t even know it,” he said. “It would be great if people could go back and check their video recordings.”

Hatters with video of the fireball can email it to Ciceri at fabio.ciceri@ucalgary.ca, upload to YouTube or report it to the IMO.