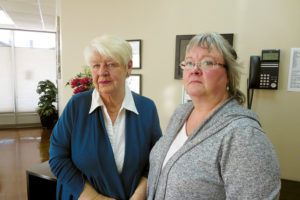 NEWS PHOTO GILLIAN SLADE
CORE Association's children's program for those with disabilities is closing in March as a result of changes to the funding model. Executive director Rita Bessant and Wendy Ebach, manager of services co-ordination, say they are devastated about the impact this will have on families.

A local agency’s program that has helped children with developmental challenges and their families for more than four decades, is cancelled.

Rita Bessant, executive director for CORE Association, says it comes down to changes to government funding.

CORE sent a letter to parents of clients enrolled in the children’s services program that as of March 20 will no longer be available.

“Our hearts go out to these families. It’s the last thing we wanted to do,” said Bessant, calling it “devastating.”

Wendy Ebach, manager of services co-ordination at CORE, says this was the last local agency offering children services after REDI and Next Step pulled out about two years ago.

Tashia Mac Whirter says her “severely disabled” son, Kai, 10, has been in CORE’s program for eight years. She’s a single mom, who has some disability challenges of her own, and no family at all to provide any support.

She says CORE has provided supports for physical and occupational therapy and respite, something that was really needed in this community.

“We don’t have a lot of resources compared to other cities,” said Mac Whirter. “It’s very overwhelming. I lost both of my parents five years ago. I am limited on friends because I can’t go out and do things. I deserve this help.”

CORE, established 67 years ago, says early intervention is crucial to the development, health and well-being of children with developmental challenges, said Bessant. The program has been running recently with a planned deficit hoping to find a way to continue, but funding was not forthcoming.

The local Family Support for Children with Disabilities provincial government office, under the Community and Social Services ministry, determines what family supports are required for children with disabilities.

Ebach says some parents do not want to become the employer handling a payroll and employees.

“FSCD was specifically hired to help us with this. Why are we doing their job? We have enough on our plates … My son has numerous issues I have to deal with,” said Mac Whirter.

Drew Barnes, MLA for Cypress-Medicine Hat, says he empathizes with Mac Whirter and others in her position.

He says rural areas have challenges not faced in big cities where there are typically more options.

“I think our government has to make the strongest effort possible to make sure rural Alberta receives as many benefits as possible,” said Barnes.

Bessant says CORE is a non-profit agency that provided a program with proven results and knowledgeable staff. She suspects the individuals that parents will have to hire will be providing a service for profit.