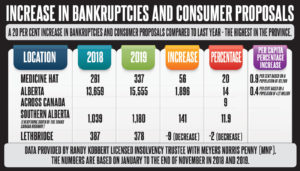 A chart shows the year-over-year increases to bankruptcy claims in Medicine Hat, region and across the province.--NEWS GRAPHIC MICHELLE DOUVILLE

A bankruptcy trustee says so many properties affected in Medicine Hat are not selling and have to be returned to the mortgagees.

“Between people trying to sell them themselves and the properties that we’ve got, it certainly would be probably at least 50 (properties),” said Randy Kobbert, licensed insolvency trustee with Meyers Norris Penny.

“I have many properties, that as trustee, I’m trying to sell and we just simply get to the point where we have to give them back to the mortgagees because we just have not been able to sell them, even for the mortgage balances outstanding.”

Dione Todd, president of the Medicine Hat Real Estate Board, says it is difficult to know why those properties have not been selling. Price could be a factor because typically lower priced homes sell faster than higher priced ones.

Todd says the price of homes has not dropped compared with figures from last month or even last year or the year before that.

Medicine Hat leads the province with the highest increase in number of bankruptcies at 20 per cent.

In 2019 there were 337 bankruptcies and consumer proposals, which is a legal settlement (reduced amount) offered to creditors that is part of bankruptcy legislation, said Kobbert. In 2018 there were 281.

Kobbert, who comes to the Medicine Hat office from Lethbridge once a week to handle bankruptcies, says he has never been busier in Medicine Hat.

The loss of employment is a major cause for bankruptcies and even those who have found another job are struggling, he said. Others are underemployed and are struggling to adjust to the wage they are getting now. Some are still struggling to find a job.

Marital splits is another contributing factor to bankruptcies. Kobbert says he believes those splits are often triggered by the enormous stress a couple faces when debts become overwhelming after loss of employment. It contributes to conflict in the marriage.

Many of the people declaring bankruptcy are seniors and one of the contributing factors is double-digit rent increases.