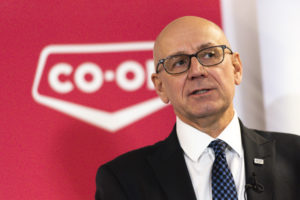 Co-op card-locks in southeast Alberta and across the prairies put purchasing restrictions in place this week as a lockout and blockade at the Regina refinery lingers on.

As of Tuesday, card-lock customers will be limited to purchasing 100 litres of gasoline and 300 litres of diesel per day until further notice.

“Federated Co-operative Ltd., and the Co-op Refinery Complex would like to assure our customers that there is plenty of fuel available,” read the statement posted by regional retailer South Country Co-op. “However, Unifor’s illegal blockades are preventing us from getting it to you.”

Unionized refinery workers, represented by Unifor, have been picketing the refinery and fuel depots since they were locked out in early December. That followed a strike vote in the contract dispute that revolves largely around pension plan issues.

Unifor issued a statement on Tuesday saying the blame for any disruption to business lays with Co-op for refusing to counter a union proposal during limited talks last week.

The same restrictions are not believed to involve retail gas bars.