Little dog not so lucky this time 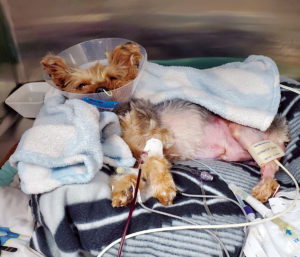 SUBMITTED PHOTO
Three-year-old Yorkie Little Man gets treatment at a Calgary pet hospital Sunday after being attacked by a dog much larger than him. He had to have one of his back legs removed because of the attack and there is no timeline for him to get released from care.

After surviving the jaws of a coyote in 2018 with little injury, three-year-old Yorkie Little Man was once again attacked by an animal much larger than him – and this time he was badly hurt.

Owner Diane Galvez was spending a bit of time with Little Man outside their place Friday when she saw a “significantly larger” dog running towards them with its tail wagging.

“I had just gotten home from doing a little bit of shopping so we were just spending a bit of time outside so he could do his business – he was on-leash, as he always is now,” said Galvez. “I saw this dog running down the road with its tail wagging and I didn’t think much of it. Little Man gave this bark that sent shivers up my spine and I picked him up.

“The dog ran up and was basically attacking me to get Little Man out of my arms.”

Galvez says the next part of the story is a bit of a blur, but she has been told by several people what happened.

“I’ve been told that after he was ripped from my arms. I threw myself at this dog to get my dog back,” she said. “There was a number of people helping me, and because the dog attacking mine was three-legged, they were able to kick its leg out from under it.

“That’s how I got Little Man back.”

The attack happened outside of Galvez’s apartment on Cambridge Street SE.

It took around 15 minutes of fighting with the dog to get the six-pound Yorkie back. In that time Galvez says the larger dog shook Little Man “like a rag doll.” According to Galvez, this was not the first time this dog has attacked another.

“The bigger dog’s tail was wagging the entire time – that’s what really upsets me,” said Galvez. “This was a game to that dog.”

Galvez rushed her dog to an emergency hospital in Calgary where he is still staying. He had his back right leg amputated from the attack and is being closely monitored by pet medical professionals.

“He lost so much blood that he is clinically anemic,” she said. “I had to take him to Calgary because he needs 24-hour watch and care.

“He needed a blood transfusion and he had a reaction to it. Everything is day by day right now, but he can’t leave until he can stand on his own.”

Galvez says she is speaking up to see stricter bylaw enforcement for dogs who have attacked more than once.

“I don’t know the exact wording (of the bylaws) but I know this dog has attacked at least one other dog before,” she said. “One woman in my area told me that same three-legged dog chased her and her small dog around. A police officer had to save them.

“They paid the fine, sure, but how many people need to go through this? How many dogs have to suffer?

“Every time I look down at Little Man, I remember.”

Galvez says the owner of the large dog has covered the medical costs so far for Little Man and they have contacted her to sit down and go over more.