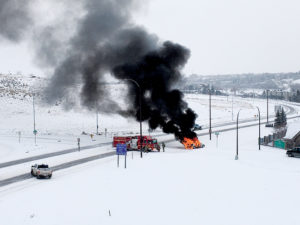 A high-end vehicle that became engulfed in flames during Monday’s extreme cold temperature wasn’t the result of any error on the driver’s part and is likely attributable to malfunctions brought on by the weather, according to the fire department.

“When it gets this cold, we tend to have a few more vehicle fires,” fire marshal and chief investigator Scott Hanelt told the News.

He says the driver saw the lights of his Mercedes flickering and acting strange before noticing smoke coming from the rear of the vehicle.

“It just got progressively worse. He pulled over, fire started coming out of the back of the vehicle,” said Hanelt.

A good Samaritan stopped and attempted to extinguish the blaze, but was unable to, so they called the fire department to the scene at Third Street NW and River Ridge Drive.

“When the crews got there, the vehicle was fully engulfed in fire,” Hanelt said.

He said the vehicle is now “pretty much a complete write-off,” with its back portion and occupant compartment “heavily fire damaged.”

The fire department is in contact with a mechanic to identify some of its parts, since they’ve never dealt with a burning Mercedes before.

Although Hanelt hasn’t “ascertained cause yet,” he’s seen “no evidence” the malfunction was a result of anything the driver did to the vehicle.

“There’s no evidence of anything in the trunk that shouldn’t be in the trunk,” he said. “To me, this looks like it might be a wiring issue. Sometimes the cold weather can cause things to break or fail.”

The driver had recently driven the car from Ontario and had no mechanical issues, Hanelt added.

While the firefighters did their work, police played a support role, ensuring traffic kept moving.

“The police were responsible for traffic control and blocking off wherever necessary so the firefighters could do their jobs,” said traffic Sgt. Gerald Sadlemyer.