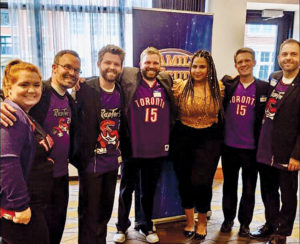 SUBMITTED PHOTO
The Hale brothers: Troy, Bradley, Brock, Tyson and Tanner stand with their sister, Shelby Crapo (far left), after auditioning for Family Feud Canada. The five brothers will be flying out to film episodes this weekend in Toronto.

Troy, Bradley, Brock, Tyson and Tanner Hale are flying to Toronto this weekend to spend time together, but this won’t be a typical vacation.

After a few months of waiting, the Hat-born brothers found out last week that their auditions were accepted for the first season of CBC’s Family Feud Canada.

“I’m not sure how my mom heard about the auditions but one day she texted me and said we should do something with our family,” said Troy. “We had to put together a team of five people and send in an audition video.

“We had trouble picking which five of us to be on the team, because there’s six kids, two parents and a bunch of in-laws. “We eventually decided that us having five brothers was pretty unique and we recorded the video.”

Three hours after sending the video in, Troy got a call from producers asking to meet the brothers in person for an audition in Calgary.

“I got a call from Toronto the other day and I thought it was going to be work-related,” he said. “After the Calgary audition they told us they would be making phone calls in mid-October, so I think a lot of us had given up hope.

“When I answered the call I was ecstatic and eventually got to tell everyone.”

Troy was at work when he got the call, so he hopped on Skype to tell as much of his family as he could. The five-piece will be filming episodes this weekend in Toronto.

“I know three is the amount of episodes we are eligible to win, after that they bring in a new family,” he said. “We don’t know how many they’re going to be shooting but they’ve told us to prepare for two days.”

The show is broadcast Monday to Thursday on CBC and is hosted by comedian Gerry Dee.

While the brothers just got the good news, there has already been talk of strategy and a game plan, especially for the ending segment of the show where only two people get to participate.

“We selected me as the team captain because I submitted the video and I’m the oldest, so it seemed like a natural fit,” he said. “As far as the Fast Money segment, we’ve talked about it but haven’t finalized anything.

“At the in-person audition we stood beside each other oldest to youngest – I think we’ll just stick with that.”

The brothers have yet to pick out matching outfits yet for the show. Troy says it’s going to be a fun trip, win or lose.

“This is going to be a great trip together as brothers,” he said. “We hope to win and earn some cash, if not we know it’ll be a fun time.”

The five brothers have one sister, Shelby Crapo, who they say is being a good sport with the whole experience.

“We told her we’d split the money six ways if we win anything,” he said.