A cold week of ‘what the heck is this?’ arrives 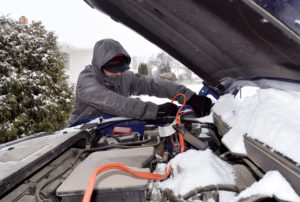 NEWS PHOTO COLLIN GALLANT
Hatter Mike Thompson helps out his father-in-law with a boost on Monday afternoon in the Southwest Hill as temperatures hoverd near the day time high of minus-25C. The cold spell is expected to remain for most of the week but lessen in the region on Saturday.

A winter’s blast brought the first of five frigid days in the forecast to Medicine Hat on Monday while almost the entire province languished under an extreme cold weather warning from Environment Canada.

The daytime high to start the week reached-23C, while the expected overnight low was-30C not including windchill

A cold weather system that began in northern Alberta on the weekend, reached the Montana border by mid-afternoon, thereby blanketing the province under the weather warning.

The same situation extended across all of Saskatchewan south of Saskatoon, and large portions of Montana, where the U.S. national weather service tracked storms from west to east.

After seasonal to moderate temperatures in southern Alberta since early November, the cold snap was unwelcome in the Gas City, though few major problems were reported to authorities.

The Alberta Motor Association is reminding travellers to be prepared when travelling on highways, leave extra time, drive for the conditions and dress appropriately.

Winter clothing, emergency kits (with food, blankets and supplies), plus a charged cell-phone are necessities, the AMA stated.

Conditions on major routes in southeast Alberta showed winter driving conditions with most highways partly snow covered and sections of Highway 41 covered with snow or ice.

The Saskatchewan ministry of transportation reported winter driving conditions throughout the provinces on Monday.

Overnight Sunday to Monday, the low temperature in Medicine Hat dipped to-26C at about 3 a.m., with the windchill reaching minus-35C at shortly after midnight.

The wind was relatively muted in the city, however.

The National Weather Service in Great Falls issued a wind-chill advisory for northeast Montana counties through Thursday, stating values as low as -45C could be expected.

The local forecast from Environment Canada predicts daytime highs steadily in the mid-minus-20s until Saturday, when -10C is expected.

Daytime snow should also abate after Tuesday, and night-time lows should ease after Thursday morning.