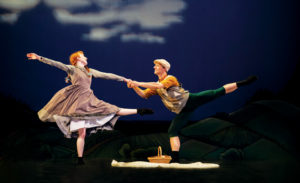 Photo by Nicholas Tian
"Anne of Green Gables – The Ballet" comes to the Esplanade on March 13. Presented by Canada's Ballet Jorgen, it's the first authorized full-length ballet of the classic Canadian tale.

UPDATE: A note posted on the Esplanade’s website on Thursday says the “representation of Canada’s Ballet Jorgen’s Anne of Green Gables is cancelled. Further information will be available soon.”

Books, multiple television series, movies, a musical and now ballet. Anne Shirley has had quite the ride.

“Ballet?,”you may be asking. Yes, ballet. The Lucy Maud Montgomery classic “Anne of Green Gables” has for the first time been authorized for a full-length ballet, one that is at the Esplanade tomorrow night courtesy of Canada’s Ballet Jorgen.

“Anne of Green Gables” follows the orphan Anne Shirley who comes to live with siblings Matthew and Marilla Cuthbert at the farm in the fictional town of Avonlea. In Prince Edward Island. After a rocky beginning she eventually becomes more welcome in the town.

Star Hannah Mae Cruddas had a hand in crafting the show after Bengt Jorgen told her of his plans to build an “Anne” ballet with her in the lead. A long-time fan of all iterations of “Anne,” Cruddas thinks the story has a perfect fit as a ballet.

“Anne is such a vibrant character and not only Anne but all of the characters in the story tend to leap off the page anyway so we thought it made sense to be made into a ballet,” noting that her recent readings of the books have unearthed a layer she didn’t notice before.

“I re-read the stories and and dog-eared all the pages that dealt with Anne’s physicality and I tried to delve into that side of the story a bit more,” she said. “I feel like it’s such a warm and bright story and there’s so much buoyancy to the characters it kind of makes sense these characters can bounce around and do a lot of physical movement on stage.”

Cruddas calls playing the role of Anne a dream come true and says she’s identified with the character for as long as she can remember. And it’s not just the red hair or that both have their roots in Nova Scotia.

“She’s such a dreamer and I felt that way about Anne’s ballet,” Cruddas said. “I really wanted to be a dancer, she dreams she belongs somewhere and that became Green Gables. She dreamed she would be a writer and she was.”

The similarities aren’t all positive though, Cruddas admits.

“Unfortunately I have a bit of a temper,” she laughed. “It’s not as bad as Anne’s though.”

Tickets are available at tixx.ca, by calling 403-502-8777 or in person at the Esplanade box office or the Medicine Hat Mall customer service desk.