Hockey players excited to compete at games this weekend 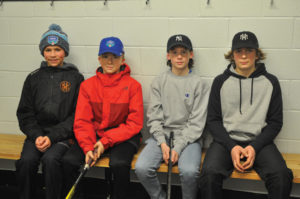 For six local pewee hockey players, the opportunity to play on the Alberta Winter Games stage together became a reality.

Redcliff’s Slade McFadzen and Cash Olson as well as Desert Blume’s Tate Bowal and Seven Persons’ Josiah Jackson, who all play for the Medicine Hat Hounds Orange peewee AA team, will be joined by Hounds Black members Ryan Miller and Cole Fisher in Airdrie for the Alberta Winter Games this weekend.

“I’m really excited for the experience,” said Bowal. “It’ll feel really good to have them (teammates) and to know them. If you don’t feel comfortable, you can just go with them and feel safe around them.”

Related story: Athletes off to Airdrie for games

The players attended a zone camp in Olds back in November.

“I felt like I played my best there,” said Bowal.

He says his strength is playing both offence and defence as a defenceman.

Getting to meet new players and to play a high level of hockey will be a highlight at the tournament for Bowal.

“I think it’s like play your best and show yourself and don’t try to be something you’re not,” Bowal said of preparing for the tournament.

Olson plays right wing and centre for the peewee Hounds team and feels fortunate for the Games experience.

“I feel very lucky and I want to say ‘good try’ for everyone who tried out. But I was super happy, jumping up and down in my room, tell my parents and everything,” said Olson.

Olson says this will bring a lot of memories with new guys competing at the top level in Alberta.

He hopes to transition his speed into the tournament.

Olson plans to go out on the ice and “try and go my hardest and if I make a mistake that’s just in the past and leave that behind.”

McFadzen says the biggest challenge for him at the games will be getting to know his defensive partners and get to know their tendencies in the short tournament.

“It will probably give me more experience and see what it’s like playing with high level players,” he said.

Jackson credits the Willie Desjardins South Alberta Hockey Academy has helped him in his player performance in making this team.

“The academy has really helped me boost my skills to make this team and it will definitely help me further in my career and my future,” said Jackson.

“I’m going to keep practising what they’ve taught me and bring it in the game.”

Olson and McFadzen are also in the academy.