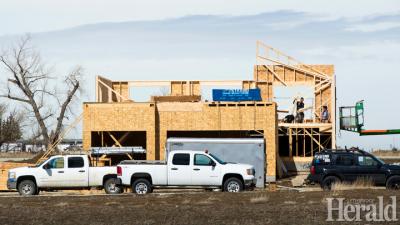 Builders work on a house under construction on the city's southside. The City will be examining current policies on secondary suites. Herald photo by Ian Martens @IMartensHerald

The City is contemplating bringing in mixed zoning for housing in subdivisions, but has opted to start by examining its current policies on secondary suites.

City council was presented with two potential options on how to allow for secondary suites in new and existing neighbourhoods and still ensure those who bought properties in areas currently zoned for single-family housing receive some protection from any potential densification the secondary suites would bring.

One proposal presented to council would allow secondary suites in zones currently made up by a majority of single-family units, but would put in a buffer which states no two secondary suites in a given neighbourhood could be within 100 metres of each other.

The other proposal would limit the number of secondary suites in a block face by stating only 25 per cent of houses on a given block could have permits for secondary suites.

Council opted on Monday to defer decision on these options to allow the City’s Community Design Committee to have further consultations with community stakeholders on the proposals. The committee will report back to council by no later than June 30.

One of those key stakeholders, BILD Lethbridge, welcomed the extended period of consultation on this important decision.

“We need more consultation, and we need to think about it some more,” agreed BILD executive officer Bridget Mearns. “It isn’t a simple issue. Some of these areas have been zoned for quite some time and secondary suites weren’t a thing at the time these were zoned. It is important we recognize the market has shifted, the economy has shifted, and the demand for secondary suites has increased. It’s about finding the balance of making sure the zoning is correct for what the consumer is asking for, but also understanding the concerns of people who have already bought in a zoned area.”

Mearns said more single-family home buyers than ever before are seeking permits to have secondary suites built into their homes as a way of generating extra income to be able to better afford their mortgage.

“The zoning is set so far in advance so that when the market shifts we do re-zoning,” stated Mearns. “When there is nobody in that neighbourhood then it is easier to redo, but if you have people already living there, then what they’ll say is, ‘That’s not the zone I bought in. You are changing the rules halfway through.'”

Housing advocate Darlene McLean of the Westminster Village neighbourhood committee said it was about time the City began contemplating mixed housing in other areas of the city besides the northside.

“I am interested in the City more actively pursuing the policy of balanced development throughout the city for intensification of land use,” she said. “There has (historically) been a practice of concentrating social housing in certain areas. Newer neighbourhoods get the protection of area rezoning plans (ARPs). The expectations are clear, and they are mapped out; whereas with the older neighbourhoods a lot of this stuff is a crapshoot.”

McLean applauded the City’s first steps in that direction by allowing for potential permitted secondary suite development in neighbourhoods that have until recently been associated only with single-family dwellings. She cautions, however, the City cannot forget about older neighbourhoods in their planning which have seen largely unchecked illegal secondary suite development for some time now.

“Secondary suites are great,” she stated. “There is a need for them, but the City has concentrated so many of them for so long in certain areas. They are finally getting with the program to implement it in an ARP in new neighbourhoods as well in a more active way. In Westminster, and in many other areas, we have a considerable number of illegal secondary suites. We have complained about those because a number of them are unsafe, and the landlords have had 14 years to upgrade and pursue a grant from the City to make these safer. I know a number of these landlords have complained to us the grant is such a small token of the huge cost to put in all these safety factors. However, our view is you own the property, you are responsible for the safety of your tenants, and if you want to run this suite you should be made to make sure it is legal or get out of that business.”