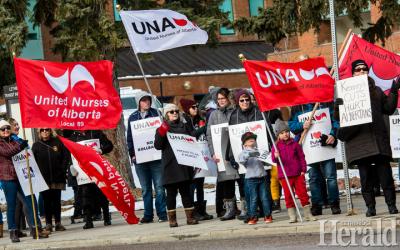 The United Nurses of Alberta Local 120 says it stands ready to fight alongside its fellow union sisters and brothers if the Kenney government picks a fight with them.

“I think they have geared up for a fight with us,” stated Local 120 president Margie Emes. “We are firm in our belief in a collective bargaining process. We hope we have less interference from the government in doing so. We’re willing to fight for what we believe in.”

Members of UNA Local 120 held an information rally on Thursday in front of Chinook Regional Hospital to draw attention to what they believe are significant impending budget cuts to public health care expected in the upcoming provincial budget. The date of the information rally was also significant, stated Emes.

“We are only one of 30 rallies that are happening across Alberta today,” she said. “The UNA has encouraged these information walks to occur. We want to be able to tell the public we’re looking out for their best interests today and every day. Today also marks 32 years since UNA last went on strike in support of public health care, and in support of registered nurses.”

Emes said as the recent government-commissioned AHS review carried out by Ernst & Young LLP shows the Kenney government is listening to accountants who “don’t have an understanding of what happens at the bedside” over the advice of medical professionals who work in the field every day taking care of the needs of patients and seniors.

“We are looking to protect public health care,” she stated, “and we strongly encourage our government to protect a publicly-funded and a publicly-delivered health-care system.”