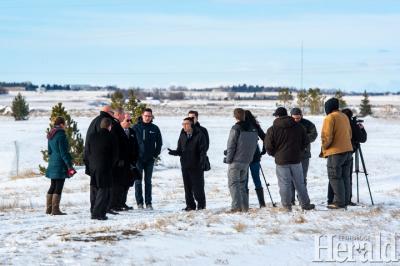 Cemetery services manager Hiroshi Okubo speaks to a group of funeral directors and media during a tour Thursday of the Citys green burial site in the Grasslands area at the Royal View Cemetery. Herald photo by Ian Martens @IMartensHerald

Lethbridge media members and representatives of the local funeral industry were invited to the City’s first green burial ground on Thursday to view the site and ask questions of City staff.

Located on the edge of Royal View Memorial Cemetery overlooking the coulees of Pavan Park with an astonishing view of Chief Mountain on the horizon, the green burial site offers a natural way to be interred after death, said Dale Martin Jr., owner of Martin Brothers Funeral Services.

“Green burial essentially takes us back to how they did funerals in the pioneer days,” he explained.

Features of green burial include no embalming, direct-to-earth burial wrapped in natural and biodegradable cloth and materials, re-seeding over the gravesite with native prairie grasses after internment, and communal memorialization of the deceased rather than using individual headstones.

“Green burial is something we are very proud to be able to offer our residents,” stated Hiroshi Okubo, cemeteries manager for the City of Lethbridge. Okubo also thanked local funeral homes for lending their support to the project.

Martin, whose family has been in the funeral home business for many generations, said no green burials had yet taken place in Lethbridge, and it was not yet a “thing” in his funeral service business at this time either. However, he stated, it was something which was coming and his family business was preparing for it.

“There hasn’t been one yet in the city of Lethbridge, but that is not to say that there won’t,” he stated. “It’s the old story: build it and they will come. We are prepared for it, and we have everything that is kind of required for it. We have a beautiful (biodegradable) wicker casket we’re offering … We kind of laughed when that type of casket came in because is hearkened back to England five generations ago when my family were in the Midlands and London. My great grandfather, as an undertaker, would use a wicker basket to pick the bodies up … What’s old is new again, and I think this (green burial movement) is that.”

He praised the City’s foresight in preparing to meet that future demand.