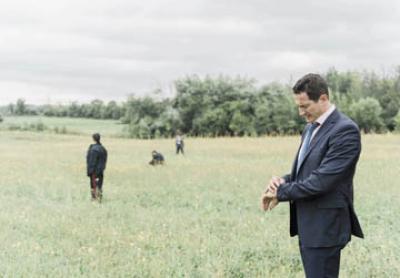 In all the seasons Petro Duszara and his team have worked on the CBC series “The Detectives” and a similar series for Netflix Canada, never had they come across a murder where the motive was a gambling addiction.

That changed with the killing of 78-year-old Lethbridge grandmother Irene Carter by her adopted daughter and only child Lisa Freihaut. That story is the focus of an episode of “The Detectives” airing next Thursday on CBC.

The episode follows Lethbridge police detective Ryan Stef as he tries to uncover the motive for, and the killer of, Carter who was found in her southside home dead at the bottom of a flight of stairs.

Stef is shown discussing the case in the episode and, like all people involved, is also portrayed by an actor in a dramatization of the case.

On Jan. 17, 2016 Carter was found dead by Freihaut’s husband, Dean, after the couple drove down to Lethbridge from their home in Calgary.

An autopsy would show Carter had been stabbed multiple times in the chest as well as her right shoulder. She also had wounds to a hand and suffered skull fractures as well as blunt-force injuries.

The adopted daughter of Carter and her husband Jack, Freihaut got power of attorney over her parents’ affairs in 2015, a matter which is revealed well into the episode as actors and Stef show how the case unravelled.

Initially, the name of a furnace repairman was given as a suspect but as the case progressed, Stef and other police began turning their attention to Freihaut, who on June 11, 2018 pleaded guilty to second-degree murder in Lethbridge and was given a life sentence.

While the series has focused on other cases in Alberta, the Carter murder was its first in Lethbridge. While investigating the case, “we found Stef to be very interesting, kind and thoughtful. There was a youthfulness and gentleness about him we really liked,” said Duszara, who has also worked on series for Discovery U.S., History Television and National Geographic channel.

“The case had a real strong emotional connection for him,” said Duszara.

Duszara and his team, while working on the episode, contacted Carter’s family and her sister was “very helpful,” even providing family photos.

All information contained in “The Detectives” episodes is on the public record.

“We don’t do a scoop on anything,” said Duszara.

While names of the main people are real, names of businesses and other people not directly connected to cases portrayed are changed.

Actors are chosen for episodes who do have a resemblance to the real people they portray.

“We’ve been lucky, knock on wood, finding actors that have a similar vibe to the detectives” they portray, said Duszara, noting finding someone to portray Lisa “was a very tough one.”

The cases they work on resonate with both actors and crew and Duszara said they’ve had to see psychologists afterwards because of the emotional toll episodes take.

“The actors really put themselves into what they’re doing. They make the experience real” for the audience, he added.

And the crew looks forward to breaks between seasons, he said.

The Carter episode provides an extremely detailed look at the case with fictionalized interviews of family members and others which tell the story as it unveils, culminating with Friehaut admitting to previous dealings with a gambling support group.

Stef shows enormous empathy to the family as he tries to break the case and find evidence to charge Friehaut for the crime and speaks about “a great fear in our community” that developed after the murder.