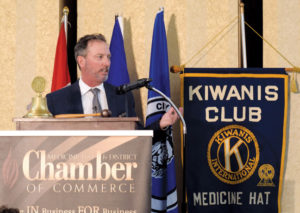 City council was give a “high level” update Friday on local action taken to help stop the spread of coronavirus as well as options for a local government response to aid financially stressed residents and businesses.

That didn’t include any final decisions, and councillors the News spoke with said they are following a rapidly evolving package of support from other levels of government before diving into a public debate about things like tax abatement or deferral, utility discounts or other measures.

“The news is coming so fast that before a page has gone through a printer it’s obsolete,” said Mayor Ted Clugston.

The 90-minute meeting concluded at about 4 p.m. and was attended remotely by councillors Phil Turnbull and Brian Varga, who has recently returned from international travel.

Council was presented with potential costs and budget implications related to complying with public health orders – such as closing city rec facilities, as well as overtime and other costs – as well as an overview of economic fallout caused by a global crash in oil prices.

The nature of the closed meeting means that no final decisions could be made. Any extraordinary action would have to be approved at an open meeting, the next of which is scheduled for April 6.

“It was really a chance council to come together,” said Clugston. “In emergencies, we let our staff, the experts, get to work at what they do.

“There were lots of ideas and nothing is off the table at this point. We’ve now asked administration to come back with options A, B, and C. (The overview Friday) will inform our decisions going forward.”

Last week the city opened a public website and phone line to outline community supports, and explain health actions and city efforts. On Friday the city also announced an economic recovery team would begin work and outlined new social services funding that would flow through the city to local agencies from the province.

Turnbull said the city is operating well, but the situation “couldn’t come at a worse time,” shortly after or during an energy price collapse, well-abandonment, provincial cuts to municipalities.

“Overall, I’m not panicking, but our citizens feel nervous and who can blame them,” he said. “What we’ll do to help? We still need the numbers.”

An economic development plan put in place last year will retool as a “task force” to help the Medicine Hat region toward economic recovery from COVID-19 pandemic, it was announced Friday.

For now that consists of a webpage for employers and workers who have been hurt by restrictions to battle the pandemic to find and navigate support programs from the province and federal governments.