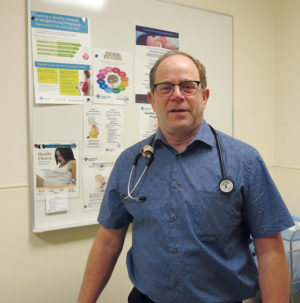 NEWS PHOTO GILLIAN SLADE
Dr. Gerry Prince a family physician who also assists at the local Family Medicine Maternity Clinic says the future of the clinic is in jeopardy because of cuts to physicians' fees.

A local physician from the Family Medicine Maternity Clinic says its ongoing viability is in jeopardy because of cuts to physicians’ fees.

Dr. Gerry Prince says he helped to establish the clinic in Medicine Hat about 17 years ago to address a shortage of physicians willing to do obstetrics. It was not financially feasible to take time away from their own clinics.

It took some innovative thinking and changes to make it financially neutral so that doctors were not out of pocket, he explained.

The provincial government’s recent changes to doctors’ fees “removed several of those financial braces,” said Prince, noting that about half of what doctors’ bill the government for covers expenses to keep their medical office open.

“If we leave our office to deliver babies it means that we can’t pay those bills as easily,” said Prince.

A physician at the FMMC will lose more than $500 per shift under the new fee structure, plus $5,000 a year, said Prince. Alberta Health has previously tried to prevent the cost of medical liability being an obstacle to delivering babies.

“It costs about an extra $5,000 a year up front to be able to deliver babies. In the past the government has covered the difference in cost between your regular liability and the extra liability to do surgery and obstetrics,” said Prince.

Doctors at the FMMC work 24-hour shifts and the fee for being on call has been reduced by half.

The overhead costs at the FMMC and at physicians’ own community practice offices has been cut. Prince says that is an average daily cost of about $135.

The fee doctors have been getting for visiting a patient in hospital is being cut by 30 per cent because the government is saying doctors do not have overhead hospital expenses, said Prince.

A spokesperson for Tyler Shandro, minister of health, indicated it would not be possible to provide comment on Thursday.

There are currently 10 physicians who take shifts at the FMMC.

Prince says some are talking about the financial impact on them and are not sure they will continue.

“The problem is if you lose a couple you start the spiral where those who are working have to work more and as you work more … the load gets heavier,” said Prince.

He warns of a “death spiral of physicians’ resources,” placing a burden on those who remain, who in turn burn out quicker and give up themselves. That is what he faced 17 years ago.

“I’m afraid we’re in the situation where we might return to that kind of a crisis. If there is no way of working around that we basically have to say we can’t do it any more,” said Prince.

Obstetricians may be able to take some of the extra patients but midwives don’t have much room to take on any extra, he said.

Prince says there was no opportunity to present these possible ramifications to the minister of health.

“Of the cuts … four of them hit directly at the maternity clinic.”

Prince says the fee cuts will be in place before the public is even aware of the full impact on them.

He says he’s lived through a physician crisis before and knows what a “death spiral” looks like.